Why some people value political engagement and even find pleasure in engaging with politics while others hardly bother about the political domain, is a crucial question for the functioning of democratic societies. In a yet unpublished manuscript, I investigate the nonpolitical origins of political engagement in early childhood experiences, more specifically, the level of need satisfaction provided in the parental home during socialization’s formative phase. Analyzing long-term cohort panel studies, I show that children growing up in need-supportive families report more interest in politics and engage more frequently in political discussions decades later in life. These findings suggest that in order to understand the origins of political engagement, political psychology should broaden the perspective and consider factors that are seemingly remote to the political domain but deeply engrained in processes of human functioning.

Political socialization research has shown that the seeds of political engagement are planted early in life. Still, we understand surprisingly little about the influences during a person’s first years of life which shape inter-individual differences in political engagement in adulthood. After plenty of research activities in the 1960s (e.g., Easton & Dennis, 1969), political socialization studies remained dormant for decades. Despite re-emerging interest in recent years (e.g., Gidengil, Wass, & Valaste, 2016; Prior, n.D.; Shani, 2009), contemporaneous studies often proceed on the narrow theoretical paths of the earlier literature. More specifically, studies tend to examine the political content of socializing experiences (instead of broader types of influences), therefore focusing on politically aware adolescents (instead of children) and investigate actual acts of participation in adulthood (instead of the general motivation to engage with politics). To understand the roots of dispositional differences of developing curiosity towards the political domain or identifying with it, I propose that varying inclinations for engaging with politics can be explained using the seemingly non-political concept of basic psychological needs.

Scholars of political values frequently refer to the concept of basic needs as the ultimate source of human striving (Haidt, 2012; Inglehart, 1977), but the idea that human beings share a universal set of common goals is less obvious to other social scientists. According to self-determination theory (SDT), a standard theory of motivation studies, basic needs can be defined in functional terms as psychological requirements for psychosocial functioning (Ryan & Deci, 2017, p. 85). According to SDT, all human beings strive for autonomy, competence, and relatedness. SDT-inspired studies have repeatedly shown that individuals who experience these needs as satisfied, will achieve higher levels on various commonly appreciated attainments of social life (e.g., education, income, mental health…). Curiously, political participation research identified the very same attainments (education, income, health…) as correlates of political engagement. Hence, considering the ubiquitous influence of basic needs for attainments in various life domains and their association with political participation, need-related experiences may also play a role in shaping political engagement.

Need satisfaction promotes growth tendencies such as curiosity and facilitates the internalization of social demands such as norms. These processes of psychosocial functioning are related to political engagement. Hence, psychosocial functioning mediates the political relevance of need satisfaction (Figure 1). Regarding growth orientations, individuals who generally refrain from spending energy on cognitive tasks may avoid topics (such as politics) they perceive as demanding. In contrast, growth-inclined individuals who find pleasure in dealing with complex issues might engage with politics particularly because it entails abstract and complex issues. The political ramifications of basic needs are even more obvious for the second process of psychosocial functioning, norm internalization. Considering that pro-participatory norms are pervasive features of democratic societies, those who integrate pro-participatory norms into their sense of selves, instead of merely perceiving them as external pressures, are more likely to orient their political behavior to these normative standards. These childhood experiences should interact with the political climate in the parental home: growing up in need-satisfying contexts is more likely to translate into political engagement when socializing agents expose the off spring to the political domain. Altogether, when children do not perceive life as a constant struggle but when they experience their basic psychological needs as satisfied, then we expect them to develop political curiosity, and we expect them to embrace pro-participatory norms, particularly when significant others exemplify the importance of political engagement.

Figure 1: The origins of political engagement

To investigate whether need-satisfying experiences in early developmental phases shape political engagement later in life, I used two longitudinal cohort studies from the United States (NLSY 79: C/YA) and the United Kingdom (BCS 1970). Given the role of parents as principal caregivers, I operationalize need-supportive contexts using dozens of items on need-related parenting styles. Hence, political engagement in adulthood is explained with information on, for example, whether parents frequently have breakfasts with the child (need for relatedness), provide explanations for parental demands (need for competence), the child has a say in setting household rules (need for autonomy).

The data shows that children from parents who employ need-supportive parenting styles show more proclivity to talk and care about politics in the following life stages. The association between need-support and political engagement, replicates in both datasets and persists after controlling for several socio-demographic characteristics of the family, child’s cognitive skills, and parental conflict. Moreover, valuing political engagement and finding joy in it results from the interactive influences of exposure to the political domain and need-supportive parenting. Figure 2 (left panel) visualizes the proclivity for political engagement among respondents with levels of parents’ political participation one standard deviation above and one standard deviation below the sample mean. The figure demonstrates that involved parenting stimulates political engagement much more strongly when the parental homes exposed the child to the political domain.

Figure 2: Interactive effects of exposure to politics and parental involvement during childhood on volitional political engagement in adulthood 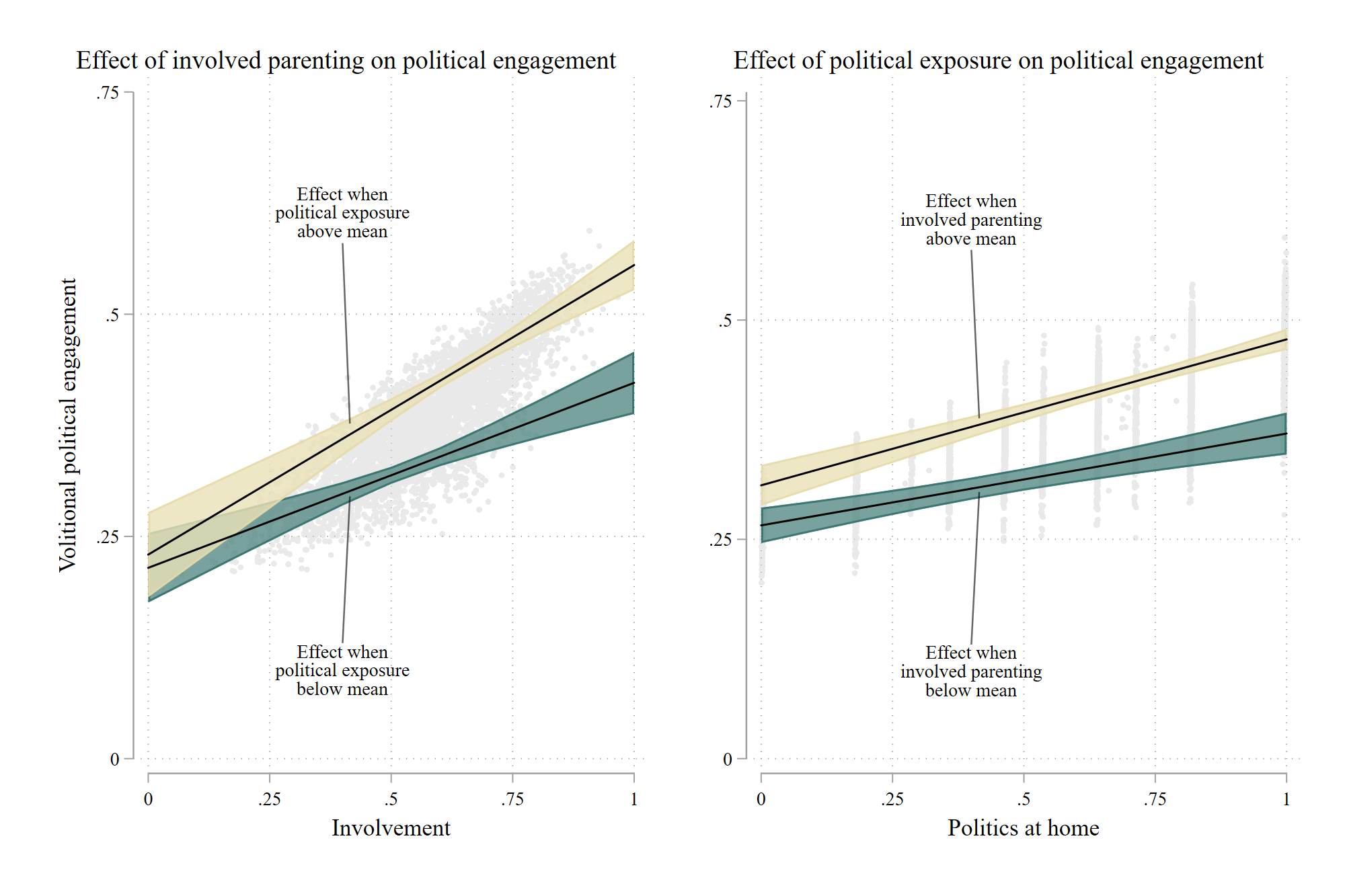 Altogether, these findings underscore the importance of need-thwarting or supportive influences, which are seemingly remote to the political domain but deeply ingrained in human processes of psychosocial functioning. Hence, individual differences in the satisfaction of basic psychological needs may present a valuable addition to scholarly explanations of individual differences in political engagement. Moreover, the notion of political engagement’s non-political origins involves practical implications for educational and political institutions. Practitioners and scholars acknowledge the importance of parents in stimulating political engagement but saw their (and other socializing agents’) primary role in domain-specific familiarization, i.e., explaining political processes and emphasizing their importance. In this vein, it seems straightforward to tackle a lack of political interest among young people by expanding civic education. However, this study suggests that domain-centered interventions need to be accompanied by more complex and comprehensive approaches to achieve full potential. Such holistic approaches should consider the various large and small need-supportive stimuli that equip children with the psychological nutrients they require to thrive in social life. 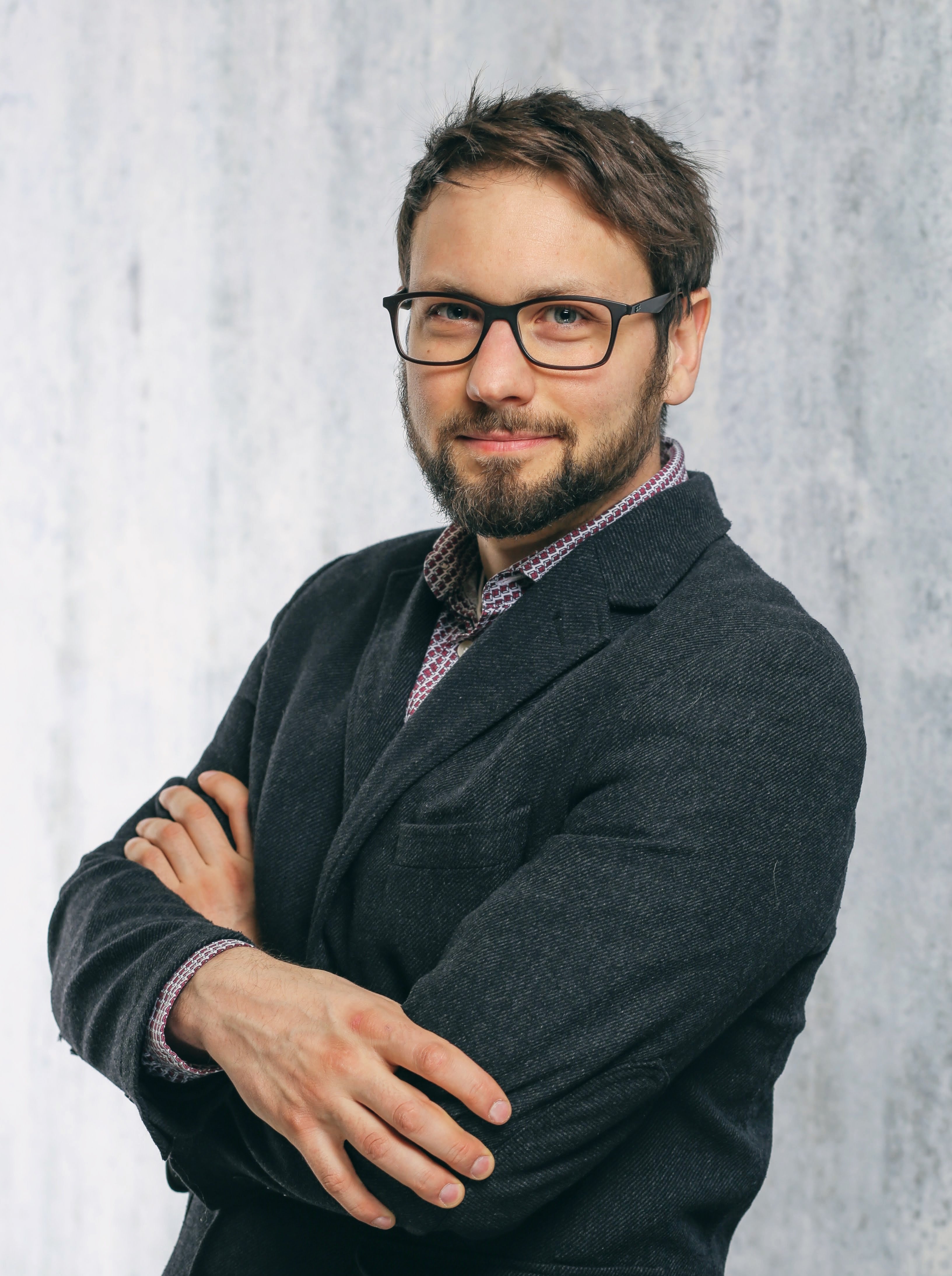 Alexander Wuttke works for the German Longitudinal Election Study at the Mannheim Centre for European Social Research. His dissertation examines what political science can learn from motivational theories in trying to understand the motivational underpinnings of political engagement.  He is a co-organizer of the “MZES 2019 Open Social Science Conference: Practicing New Standards in Research Transparency and Replicability”.

Yeah...couldn't follow this that well at all. So if we strip out all of the superfluous vocab, are you saying that children who have more basic needs met in a household are more apt to have political interests later in life? I fall into the category of not caring at all (personally I'd prefer my country be ran by the mafia, they take care of those who treat them with respect and people always clamor on about wanting more 'family' in government haha :P), but it's more an offshoot of people allowing politics to affect their daily lives that brings out my apathy.

Excess drama and freaking out about things that do not directly affect the given individual makes the whole scene appear unappealing, and people become insufferable when that's all they talk about constantly. It feels as if people try to make their politics their entire personality, which makes them appear, in my eyes anyway, as brainwashed robots spewing pre-programmed catch phrases. This is similar to how tons of movies have the phrase "smart, sexy, and ___________" as the critical praise printed on the packaging, with only the final bit being modified to avoid appearing completely identical. Sure it comes across as impressive and clever the first time you see it, but the illusion is broken once it pops up everywhere. Spewing political rhetoric feels similar to this to me.

Then I think, "how have any of these hot button issues affected me directly?" Other than income tax (which I think about once a year), and possibly my student loans when I originally got them (currently paid off), I don't see much influence in my daily life from the issues themselves. Politics sure as heck hasn't forced Capcom to release Mega Man Legends 3 after all.

On the other hand, political discussion and focus have brought a very negative impact into my life. Facebook is crammed full of the stuff and feels nothing like the website I started using in 2007, friendships have been ruined because two people can't accept having different opinions, both liberal and conservative friends have been ridiculed for the opinions they have or the policies they support, etc.

So it comes down to my experiences as an adult rather than my childhood, and it appears to me to be an activity that yields very little positive experiences but quite a lot of negative baggage. The effort spent there could be better used enjoying myself, bettering myself in some way, or even brightening someone else's day. We have finite time on this planet, and when lying on your deathbed, do you really want to have used so much of it on petty squabbles when you could have brought more positive emotion to those you care about? And I guess if bringing to joy to others isn't your thing, there's always self-serving hedonistic pleasure which would still out rank arguing about trifles on the grand scale of things haha :P