How and When do Children Understand Conflict-Related Groups?

Over 350 million children live in conflict-affected areas. Those born after peace agreements, or in the ‘post-accord generation,’ however, are still socialised in settings of protracted conflict. Symbols are often key identifying markers of the conflicting groups. However, children are not passive receivers of these messages and markers. Their behaviour, even at an early age, has implications for improving intergroup relations and future peacebuilding. Our work at the Helping Kids! lab examines children’s behaviour in protracted conflict-related contexts. Specifically, we study how ethnic awareness develops in children, and the implications this has for ethnic prejudice and prosocial behaviours in divided societies. Working with majority and minority group children in three post-accord generations, we aim to identify antecedents of children’s peacebuilding.

Helping Kids! conducted a comparative research project in three settings of protracted conflict: Northern Ireland (NI), Kosovo and Macedonia. Although the overt conflict of each setting has officially ended, it has left a lasting effect on post-accord generations. In each area, the two primary conflict-related groups have remained notably segregated across neighbourhoods and schools. Working with children from five to eleven years old, Helping Kids! explored children’s comprehension of and preference for conflict-related images and names. Understanding these outcomes of conflict can help research-based reconciliation and peacebuilding, eventually leading to a more cohesive society.

Our trained researchers visited primary schools and played child-friendly games on a laptop or tablet. We asked children about their recognition of and preference for images, symbols and names associated with each background in that context. Our games also explored children’s contact with, attitudes about and potential helping behaviours toward outgroup children.

Across all three settings, children readily recognized the social cues associated with conflict-related groups. For instance, in Northern Ireland children identified poppies as British and shamrocks as Irish; in Kosovo, children consistently categorised which murals and pop artists were Albanian or Serbian; and in Macedonia, children distinguished between various celebratory foods as Macedonian or Albanian. 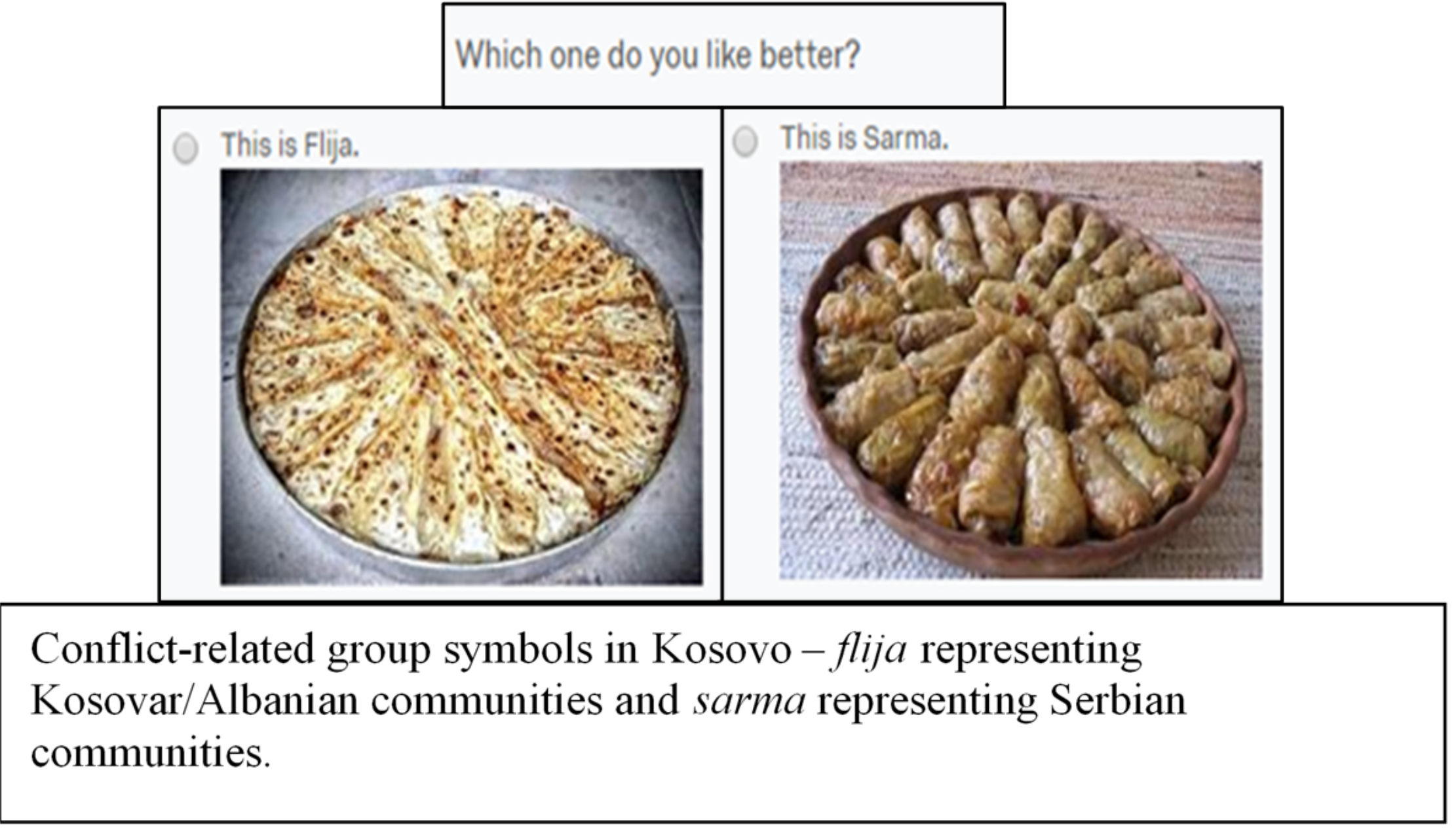 Specifically, in Northern Ireland, the current study extends previous research in four ways. First, we extend the age group previously studied (3–2 years old). Second, we not only examine awareness of and preference for conflict-related groups, but also the subsequent impact on children’s attitudes and behaviours. Third, in this context, labels of Catholic and Protestant refer to ethno-political groups, rather than religious categories, while British and Irish refer to national affiliations. Although these categories are highly overlapping, they are often investigated in isolation. We examined both allowing us to compare when these categories emerge. Finally, we developed and designed a series of quantitative, child-friendly tasks that are easily adaptable to other conflict-affected societies. The games include a series of conflict-related group symbols (e.g., neighborhood markers and flags, athletics and activities, and community and religion) that are associated with both national (British/Irish) and ethno-political (Protestant/Catholic) labels. 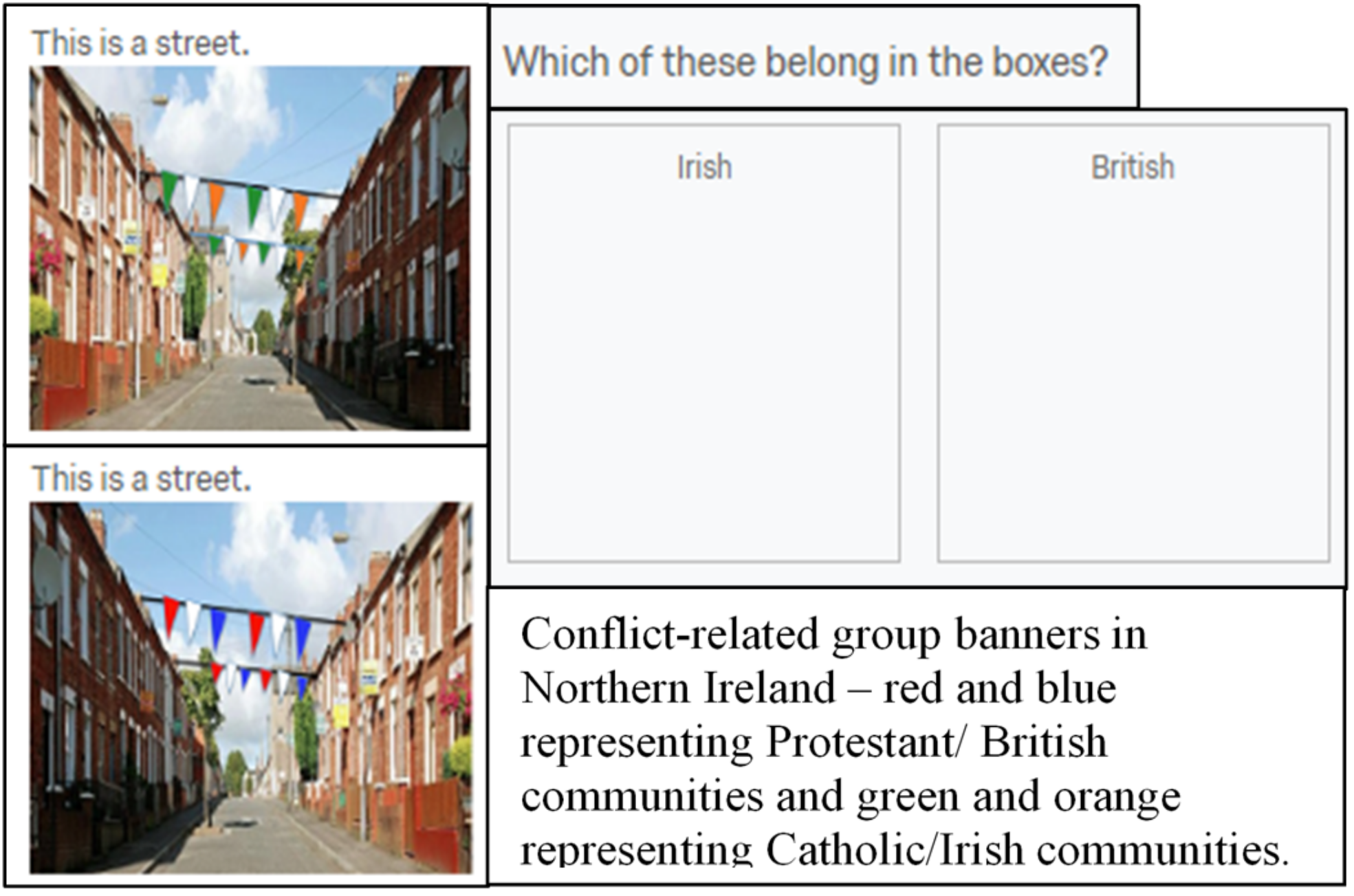 Methodologically, our findings can also inform future research. That is, our tools and methods distinguish which specific symbols are more recognized and associated with the different categories (other than just through chance). These specific symbols, therefore, could be used as subtle markers for vignettes, stories, and other subtle ways in future research. For example, the same photo of a child could be used, but wearing one football jersey or another (e.g., Celtic/Rangers), as a way to manipulate social group, but control for all other aspects of the target child. This approach is important in a setting where the two salient, conflict-related groups are not visually distinct.

More broadly, across all three settings, our findings support the phases of Social Identity Development Theory (SIDT). The more aware children were of conflict-related group markers as belonging to one group, and not the other, the more children preferred their own groups’ symbols. That is, children with higher awareness of group symbols also expressed greater preference for ingroup images. This finding supports the link from ethnic awareness to preference.

Children’s understanding of conflict-related groups, for example, had behavioural implications even at early ages. Children who preferred in-group symbols shared fewer resources (e.g., stickers) with outgroup children. Those who had more negative attitudes about hypothetical outgroup members also shared less. These findings support the link from ethnic preference to prejudice.

Previous work in Northern Ireland has identified similar patterns. Children from segregated neighbourhoods in Belfast distributed more resources to ingroup members, especially when they held a strong ingroup identity. Yet, youth in Belfast who had more quality and quantity contact with outgroup members had higher peacebuilding attitudes and civic engagement.

Complementing these findings, Helping Kids! continues to identify the antecedents of children’s peacebuilding in divided societies. We found that children know about and have preferences for social cues related to conflict-related groups. This knowledge and preference influences how resources are shared with others, an important first step in peacebuilding. Fostering more positive outgroup attitudes and opportunities for outgroup helping may have promising, long-term implications for more constructive intergroup relations.

Currently, we are working with local stakeholders in Kosovo and Macedonia to share our findings to influence local and national education policymakers and practitioners. Through discussions with families, school teachers and administrators, non-governmental organisations, and government officials, we are working to refine our findings to have an impact on the lives of children. Through these ongoing efforts, we hope that our findings can inform public policies that help children living in conflict-affected areas across the globe.

The Helping Kids! lab is extending our research to other contexts. If you are interested in learning more about our work or adopting the materials for use in other settings of political divide, please contact us through our website!

This phase of the Helping Kids! project was funded by the Department for the Economy (DfE) — Global Challenge Research Fund (GCRF) Awards [DFEGCRF17–18/Taylor and GCRF-GIAA18–19/Taylor] and the School of Psychology, Queen’s University Belfast, Research Incentivisation Scheme (RIS).